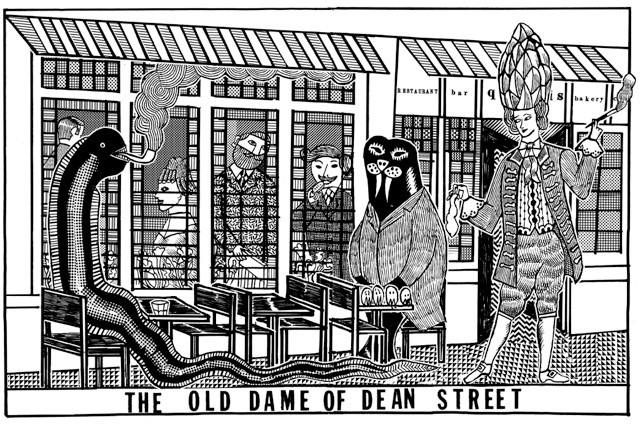 Founded in 1926 as Quo Vadis, the Great Dame of Dean Street has the kind of colourful history one might expect or hope for from its postcode. 26-29 Dean Street had formerly housed a notorious Soho brothel and been home to Karl Marx, who began writing Das Kapital in one of the upstairs rooms.

It was Pepino Leoni who gave the building its moniker, inspired by a billboard advertising a film of the same name, and established Quo Vadis as one of the great Soho restaurants. The actors, artists and glitterati of the time flocked, and Leoni himself declared that he would ‘Die on the carpet.’

The restaurant passed through a number of other hands before the Hart brothers, later joined by Jeremy Lee, steered Quo Vadis into a new safe harbour, bedecked with flowers, pressed linen and baked salsify. They take seriously their role as stewards of the reputation for excellent food and drink, uproarious company and serious enjoyment.

The Hart Brothers and Jeremy

Sam, Eddie and James Hart have been blessed with some of the best appetites ever and hospitality in their blood. Brought up in the business by their folks who have Hambleton Hall, they apply the same exacting standards to the angle of a fork as the leadership of entire teams at Quo Vadis, Barrafina and El Pastor.

It was said in Esquire that “There’s a glint in all three brothers’ eyes. They are very good at enjoying themselves. They are quite surreal and insanely funny.” We don’t disagree.

A tall Scottish cook who fills the menu daily with his favourite things, Jeremy is inspired by his boundless passion for the finest regional ingredients from Britain and further. His food is as bold and generous as his personality.

“Lee is one of those rare phenomena in the London food world: a chap everyone agrees is a good thing. Partly that is because he is sharp, funny, learned, engaged and the kind of bloke you always want in the room, but mostly it’s because he has such damn good taste.”

Just for the moment, Quo Vadis is sleeping.

The restaurant, club and delivery service are all laying dormant and readying themselves to burst back into life when the liberation gong is sounded.

Until that time, it is best to follow us on Instagram, where we will keep you updated and hopefully amused.